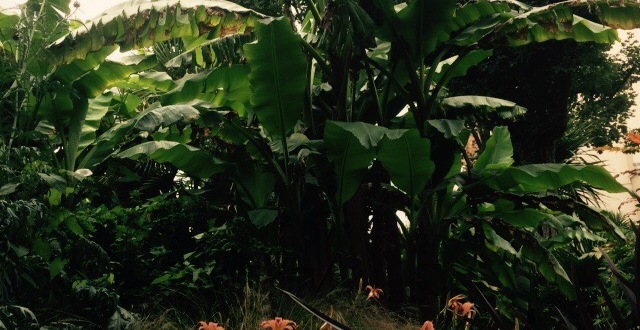 Sitting in the park on my lunch break.  So far, the alcoholics are avoiding me and have arranged themselves on the benches around the park’s edges, where they argue and swig from their cans.  It is unseasonably cold but have removed my fleece so can sit on it – a fleece!  In July!   If am lucky there will be at least a few more minutes before the rain starts again.

Have purchased the last three artichokes from the market and am excited about working my way through them this week.

All around there are the sounds of the city: trains rumble overhead, sirens call, cars and lorries whizz past. And yet it’s peaceful here.  Photo attached.

Wonder what my Seb is doing in his forest, I think as I look at the trees around me.

“Sometimes, if I look out of my hut, I can see the huge eyes of little owls,” Seb says last week, when describing the monastery-in-the-forest.  “And once when I opened my door a snake rushed in and I had to catch him and put him outside.”

“Are there tigers?” I say.  “Or clouded leopards?”

“There aren’t meant to be any wild cats around,” Seb says.

“I bet there are,” I say.  “There are tigers and clouded leopards in Burma – saw a programme about it.  And if you’re not far from the border with Burma…”

“Maybe there are, then,” he says, smiling.

“Make sure to take some photos of the wildlife,” I say.  “You know – when you have a break from meditating.”

“OK my lovely,” he says, stroking my hair.

One thought on “The Clouded Leopard*”