“I’m not going to write a blog about this match if there isn’t anything to say,” I say to the parentals.  Thirteen minutes into the first semi-final and Novak is leading Rafa 3 – 0.

“What do you mean?” Dad says, looking up from his Financial Times.

Rafa bounces the ball, whilst adjusting his t-shirt, pulling at his shorts, stroking his hair behind his ears and pushing his headband back.  He performs this ritual before almost every serve.  It works this game anyway: 2 – 4.

A little boy holds up a poster reading “I eat gluten free too, Novak.”

But now it’s set point to Novak, who wins it to take the first set.  The world number one is in commanding form today.

“Now the crowd are going to get behind Rafa to give them a proper match,” Andrew Castle says.

Novak holds his serve to love.  1 – 1.  “From Nadal’s point of view, it’s one of those matches where he always feels that he’s serving,” Tim says.

Dad has fallen asleep in his chair.

“Still no breakpoints for Rafael Nadal in this match, Andrew says.

“Novak has been clinical in all areas,” Tim says.

I need a wee but don’t want to miss the rest of the match, I think as Novak does a volley that doesn’t seem possible and Rafa applauds him.

Rafa is sweating now as he serves to stay in the match.  Deuce.  Advantage Rafa but Novak has an answer.

“How can he find the lines like that?” Mum says.

Then it’s match point to Novak, which he wins.

“Is it finished?” Dad says, opening his eyes.

On the plus side: have bought a present for Seb.  Look: 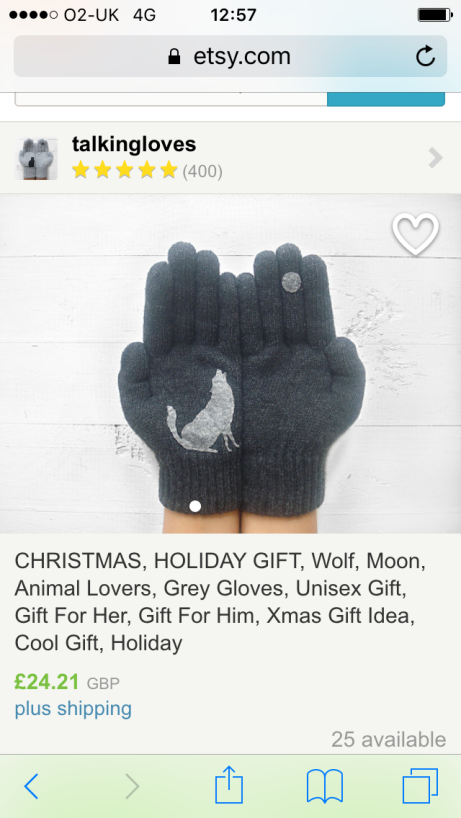 Hope he will like them, or at least appreciate the thought I’ve put in to finding him wolf-howling-at-the-moon gloves.

The attached photo is the fluffy monster – two years ago today.

4 thoughts on “Match Point For Murder*”