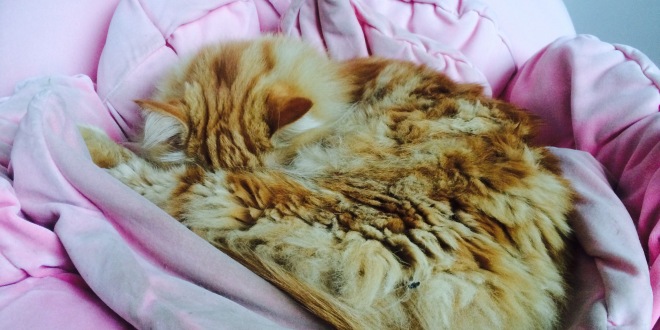 “Oh, there you are, Tanya,” Mum says as I wander into the kitchen in search of fizzy water.  “Can you find that kitten and ask him why he hasn’t eaten his supper?”

“No, he’s in the house somewhere,” Mum says, putting a dish covered in foil in the oven.

He’s not under the piano, or behind the piano stool.  He’s not behind the grey sofa or the spotty sofa.  He’s not at the back of the parental wardrobe or under my purple chair. Opening the door to my brother’s room, I’m greeted by a large orange person rolling over, displaying his tummy.

“Are you OK, fluffy monster?” I say, picking him up.  “Would you like some supper?”  Carrying him up to his room, I put him next to his bowl.  He looks at the wet food in utter disgust, turns away from it and waves his tail.  He gazes at me, his green-gold eyes full of reproach.

“How about some dry food then?” I say, taking the tin down from the shelf, shaking some into the bowl.  He dives into the bowl, face first.  There’s a loud crunching as he eats.

“He wouldn’t eat the wet food,” I tell Mum, on my return to the kitchen.  “So I gave him some dried food and…”

“But he’s already had dried food today,” Mum says, “he’s not allowed any more of it or…”

Returning to the fluffy monster’s room, I find a bottle of fizzy water.  He’s still munching his supper.

“Well, he’s eating all the food,” I tell Mum on my return.  “Can’t take it away from him.  Maybe he just doesn’t like the wet food?”

“Maybe he doesn’t like it because it’s been in the fridge,” Mum says.  “It’s probably not very tempting when it’s cold.”

Dad is sitting in his chair cracking pistachios and dropping their shells everywhere; Mum is doing The Times crossword and am writing this.  In a minute will need to have a bath as there is Avocado Soup soon and am excited about supper.